A Call To Be God’s Companion 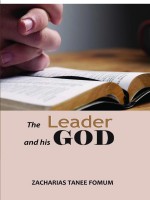 The Bible says, “Then God said, ‘Let us make man in our image, in our likeness, and let them rule over the fish of the sea and the birds of the air, over the livestock, over all the earth, and over all the creatures that move along the ground.’ So God created man in his own image, in the image of God he created him; male and female he created them” (Genesis 1:26-27).

Since that day, I have never been the same. I try to serve the Lord, but service is not the main thing. Serving the Lord is only secondary to me. I want to offer to the Lord a person He can enjoy. Most of my time in prayer is waiting before the Lord, offering myself to Him, so that He may enjoy me.

The desire to please Him has grown in me since that day. It is my first reason for living. Everything else is secondary. People talk about suffering for the Lord. I have not suffered for Him. I have not sacrificed for Him. I have only had a privilege to beg Him so that He could accept me, so that I may minister to Him.

I seek Him so that I may find Him, know Him, love Him, and only afterwards serve Him. The pattern is:

“He appointed twelve, designating them Apostles, that they might be with Him and that He might send them to preach the Gospel and cast out demons” (Mark 3:14).

The primary reason for calling the twelve was so that they might be with the Lord Jesus. Companionship and fellowship with Him were top-most. Sending them to preach the gospel and to cast out demons was only secondary.
I really started serving the Lord after nineteen years as a believer. Before then, I was just enjoying Him. So many believers have gotten so caught up with serving God that they have lost Him along the way. They do not first seek to know the God they are serving, or want to serve. No wonder, they complain, and are unhappy. They are in the service of an unknown God. Whereas, one look into His all-lovely face could brighten the day and brighten one’s whole life.

He appointed the twelve so that:

The central purpose for appointing them was that His needs might be met. The lover is there to satisfy the needs of the Beloved, by his being, and by his presence.
He appointed twelve so that they might be with Him; so that He might impregnate them with His being, so that He might transfuse them with His being; so that they might put Him on. He appointed them so that when they go to people, they will give them Jesus, - The Jesus they would have put on by sustained being, and staying with Him.

That is why the appointed twelve had to be with Him and put Him on. Wherever He went, they went with Him. In the Acts of the Apostles, those who held the disciples on trial remembered that they had been with Jesus:
“When they saw the courage of Peter and John and realized that they were unschooled, ordinary men, they were astonished and they took note that these men had been with Jesus” (Acts 4:13).
Let us take a look at Mary of Bethany in the same light. The Bible says,

“As Jesus and his disciples were on their way, he came to a village where a woman named Martha opened her home to him. She had a sister called Mary, who sat at the Lord’s feet listening to what he said. But Martha was distracted by all the preparations that had to be made. She came to him and asked, ‘Lord, don’t you care that my sister has left me to do the work by myself? Tell her to help me!’” (Luke 10:38-40).

Mary sat at the feet of the Lord, ministering to the Lord’s need; His need of a worshipper. He needed someone just there, offering her being, offering her presence, but Martha was gathering things to bring. Martha, with her things, got a second-class place. Mary got the better portion, which will never, never be taken away from her.

God is seeking for worshippers

Now, I sing more than I have sung before. I sing and dance alone. One of my joys in heaven will be to sing to the Saviour. I now sing to Him in anticipation. It is a privilege to sing to God, to dance for Him, to sing with all your might, holding nothing back. It has not always been so in the past. I have grown in this with increasing time spent in His presence, contemplating Him and ministering to Him.