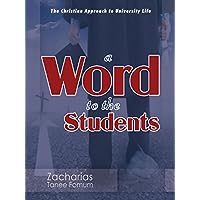 A word to the students of the university of Buea (Cameroon)

I have been really annoyed this evening. You organised a meeting for 5 p.am. but by 5:30 when I arrived here from Yaounde, you were not here. I am still here just because the Church in Buea has a meeting. Your lateness is catastrophic. It is tragic. If I were dealing with village women, I would understand. It makes me tremble for the future of the Church and the work. You are not serious. I had four or five things to say, but I don’t know what to say now because when I have to say in forty-five minutes what would have been said in two hours, it tells me that that is the spirit with which you take life as well as your lectures. It is the spirit of a mediocre. It is mediocrity. The student who has not mastered the use of time has failed.

I want to remind you of an issue that came through during a recent retreat. It is that of sexual purity.

“We have a young sister, and her breasts are not yet grown. What shall we do for our sister for the day she is spoken for? If she is a wall, we will build towers of silver on her. If she is a door, we will enclose her with panels of cedar. I am a wall, and my breasts are like towers. Thus I have become in his eyes like one bringing contentment” (Song of Songs 8:8-10).

Maybe you have been reading these Scriptures and they made no sense to you. Sexual purity is highly needed among the students. Sexual purity goes with big rewards. I was sad when some years ago in Yaounde, a brother near his last year at the University, who had remained a virgin till the age of twenty-four, committed the folly of allowing a sister who had had three children with three different men in the world to lure him into sexual immorality. That was the sad way of ending his virginity. He will live to remember it in all eternity. Ten tons of cedar wood cannot compare with a hundred grams of silver. “I am a wall” or “I have all along been a wall and my breasts are like towers.” She was married as a virgin and so she brought contentment to her husband. When you are a door, people only ask, “To how many men has she brought contentment?” Are you a wall or a door?

Just in passing: It is the grave duty of parents to ensure that their children are brought up to be walls. To fail there is to betray the child. That is why nobody in his senses can send his child to go and live with somebody else because the mother has an intuitive distinctive sense of knowledge. And all this thing of flooding the house with relatives who do not know what life is, can be disastrous. In the case at hand, a relative was living in a sister’s house. The girls’ room was near the boys’ and her son had an unending sexual relationship with her as a way of life. She only knew about it when the girl got pregnant and the brother of the girl got her to commit an abortion. It is an indication that she had lost God. If you can’t know what is happening under your roof, you are severed from God.

A few days ago, a brother came to confess that for eighteen months, he has run away from my meetings and from looking into my eyes. “They terrify me,” he said. If parents lack the power to detect evil, then they have lost God. In Kampala there was a humble, beautiful sister called Faith. Every boy thought she was the dream girl for himself. A brother told my wife, “God has revealed to me that Faith is my wife.” “What?” “Sister Faith is my wife.” Many boys had revelations that Sister Faith would be their wife! But she systematically said, “No.” She was doing a Bachelor’s degree in the Fine Arts. Then one day a choir came from Nairobi with an ugly fellow as the choir conductor. Faith fell completely for him. She wanted him as her husband. One thing with women is that they like monkeys that are at the front displaying on the stage. There used to be a monkey in the zoo in Limbe that had a guitar. When Faith told me their intentions, I invited them to my house. We quarrelled for two hours. We just disagreed on everything on Planet Earth. We would quarrel and quarrel; then I would go into the bedroom and repent. Then I would come out and we would quarrel and quarrel to no avail. Little did I know that my persistent refusal was discernment. Then they got married and this fellow was found to be impotent! He had been impotent from birth. So he was looking for a sister who could take care of his impotence!

He had been a fraud all these years, leading a Pentecostal Church choir. It was a sad thing, and for a girl like Faith who had so much to offer! Are you a wall or a door? What are your children? Are they walls or doors? The door can bring no contentment to a man. The husband will always ask, “What happened to the other men you slept with?” I am asking for radical purity in the sexual life among the students. I am asking that every student be radically pure in the sexual life. May the truth of this Word mould the life of every student