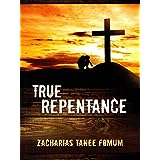 The type of restitution you will carry out will depend on the type of sin committed.(For a more thorough treatment of the topic, see our book in this series entitled Restitution: An Important Message For the Overcomers.

If a man steals an ox or a sheep and slaughters it or sells it, he must pay back five head of cattle for the ox and four sheep for the sheep. If a thief is caught breaking in and is struck so that he dies, the defender is not guilty of bloodshed; but if it happens after sunset, he is guilty of bloodshed.

AA thief must certainly make restitution, but if he has nothing, he must be sold to pay for his theft. If the stolen animal is found alive in his possession - whether ox or donkey or sheep - he must pay back double.

If fire breaks out and spreads into thorn bushes so that it burns stocks of grain and standing corn or the whole field, the one who started the fire must make restitution.

If a man gives his neighbour silver or goods for safekeeping and they are stolen from the neighbour’s house, the thief, if he is caught, must pay back double. But if the thief is not found, the owner of the house must appear before the judges to determine whether he has laid his hands on the other man’s property. In all cases of illegal possession of an ox, a donkey, a sheep, a garment, or any other lost property about which somebody says, ‘This is mine,’ both parties are to bring their cases before the judges. The one whom the judges declare guilty must pay back double to his neighbour.

If a man gives a donkey, an ox, a sheep or any other animal to his neighbour for safekeeping and it dies or is injured or is taken away while no-one is looking, the issue between them will be settled by the taking of an oath before the Lord that the neighbour did not lay hands on the other person’s property. The owner is to accept this, and no restitution is required. But if the animal was stolen from the neighbour, he must make restitution to the owner. If it was torn to pieces by a wild animal, he shall bring the remains as evidence and he will not be required to pay for the torn animal.

If a man borrows an animal from his neighbour and it is injured or dies while the owner is not present, he must make restitution. But if the owner is with the animal, the borrower will not have to pay. If the animal was hired, the money paid for the hire covers the loss. (Exodus 22:1-15).

The Lord said to Moses,

Say to the Israelites: ‘When a man or woman wrongs another in any way and so is unfaithful to the Lord, that person is guilty and must confess the sin he has committed. He must make full restitution for his wrong, add one fifth to it and give it all to the person he has wronged. But if that person has no close relative to whom restitution can be made for the wrong, the restitution belongs to the Lord and must be given to the priest, along with the ram with which atonement is made for him.’ (Numbers 5:5-8).

Jesus entered Jericho and was passing through. A man was there by the name of Zacchaeus; he was a chief tax collector and was wealthy. He wanted to see who Jesus was, but being a short man he could not, because of the crowd. So he ran ahead and climbed a sycamore-fig tree to see him, since Jesus was coming that way.

When Jesus reached the spot, he looked up and said to him, ‘Zacchaeus come down immediately. I must stay at your house today.’ So he came down at once and welcomed Him gladly.

All the people saw this and began to mutter, ‘He has gone to be the guest of a sinner.’

But Zacchaeus stood up and said to the Lord, ‘Look, Lord! Here and now I give half of my possessions to the poor, and if I have cheated anybody out of anything, I will pay back four times, the amount.’

Jesus said to him, ‘Today salvation has come to his house, because this man, too, is a son of Abraham. For the Son of man came to seek and to save what was lost. (Luke 19:1-10)

As you face up to the matter of restitution, you may have to ask yourself the following questions so as to see clearly where you need to carry out restitution:

As you answer these questions, you will confront financial and moral issues about which you should carry out restitution. Do.

Today salvation has come to his house, because this man, too, is a son of Abraham. For the Son of man came to seek and save what was lost (Luke 19:9-10)

You too should go and do likewise.