The Past And Spiritual Greatness 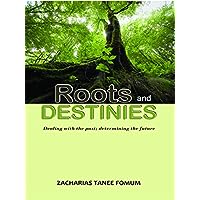 The impact of the past on spiritual greatness is even more pronounced. If your relatives did not take God seriously,

you may find yourself not taking God seriously as well.

Did your parents or someone in the family tend towards backsliding?

Yours may surely be a tendency to backsliding too. You came from a spiritual background that was hardened to light, however small. Therefore, your spiritual inheritance will be small. You find that you are the kind who do not go deeply into things. You would not go deeply in God.

Do not just jump over things. In the world, did you get to the heights? Did you settle for mediocrity? At the natural level where are you in relation to your classmates? Have you emerged?

If you work on it deeply, profoundly, you can halt some undesirable things. If not, as you grow older you will be more and more useless.. You will somehow not blossom. You can’t reach the top. You can’t flourish.

Did you have an opportunity to get to the top spiritually? Did you make use of it? Somewhere greatness just seems to run away from you. Greatness just avoids you, though you got exceptional opportunities.

My brother’s son is in South Africa. He became the South African scrabble champion. He sent me a letter describing his success. It was exactly like what my elder brother wrote some years ago when he was in school. It was as if my elder brother wrote it himself. I was amazed. Son-ship is something. He is caught up with his glory, as was his father.

If you take your background carelessly, you are the most foolish of fools. You know your limits from what you drag behind you. Today there is genetic engineering where you can cut off certain genetic traits. You can also carry out spiritual genetic engineering. Please do.

God is giving you an opportunity to correct the past and to re-determine the future. The choice is yours. You can also emerge differently from your family. You don’t need to enter into the condemnation of your family.

But his brother Judah just went into the sin of their father. Judah just fell hopelessly with Tamar. Look at how the stories are presented in the Bible; Judah’s immorality is in chapter thirty seven and Joseph’s purity is in chapter thirty eight, as if to show the contrast between the two sons. Everything was set for Joseph to fail. Remember their sister Dina was rapped.

If your father failed or backslid, and you allow things to go naturally you will do the same. If your father was disloyal, you are to do same, if you let things be. You know what awaits you. You either blot it off or you establish it by doing nothing about it.

Confront your character. Are you a person of depth or are you superficial? Are you a person who fights a battle and does not rest until the enemy is buried? Do you just touch things and leave them? Do you generally want to overthrow the person you have built up to a certain point? Even if it means bleeding in the process? Two pathways are set before you.