Some Thoughts on Prayer 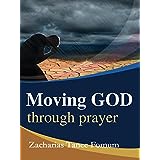