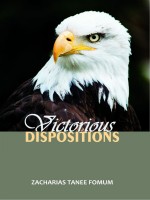 Zebedee was on duty with his children. Then this man Jesus came and took one and took the second of his sons. The mother said – these boys are not wise. So she took the purse and followed. The business closed. Jesus just took everything.

Somehow, women seem to catch vision faster than men. The men drag, weighing the pros and the cons. Women are not like that. The man wants to hold things in the balance. It finally is a factor of indiscipline. The tragedy is that they can wait till 10 years; and so have lost those years. They say they are investigating other possibilities. After those other possibilities, they are no longer sure. In the first place, they went investigating because they were not sure from the start.

I don’t know when I changed my mind and was correct. The first impression that the spirit put in my heart were God’s leading for me. In 1980 Rogers Hymes and Smith suggested that I should take over the World Wide Missionary School. I told them it was a distraction. Seven years later we were in the U.S. Jim Smith had left Mpoundou then. They again told me, “take the school, you are the only person we know who can use it for God”. I told them “No”. When the Smiths came here and made a third proposal, I became open to it. America wrote to say the school should be given to us.

We formed an NGO and sat to see how it should be run. Then we discovered that the land title was in the name of another person, and the school was heavily in debt. When I was going to the second board meeting, the Lord told me “I had said no to this school ”. he said that I was loosing what I saw from that start.

We shall not go building schools. Ours is the preaching of the gospel. There are many schools and we cannot go wasting resources whereas the Government and many others have provided for the schools. We shall do that which no one else can really do; win souls and teach them to go and win other souls. We shall put all that we know into the School of Knowing and Serving God.

We shall have the Universities of   :

Ours is to win souls and build men. Some one has said, do not do anything where you will neither be second nor third. We cannot beat the Government, and the Catholics. We shall go where we shall serve God’s purposes.

In the U.S, a certain business holding had a number of one hundred and forty three companies. They decided they were to close all the companies where their products were not world-top. And their profits tripled with that move. The world puts its all to obtain what it wants. Do not be divided. Do not place one leg on one boat and another in the other. Soon you will be food for the big fish.

So Mrs Zebedee took the purse and went after Jesus. She took the lead, perhaps while her husband was still weighing things. Don’t take your birth right and give to a woman. You will need parliament to take it back. If it is your wife building your relationship with spiritual authority, then she is the authority. I know that it is men who should lead. In our home, even when papa was absent, he was fully there. His mighty ideas, impressions were there.

Up to this point we can say;