What May not be done in the name of restitution 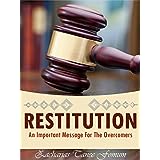 It is relieving to confess one’s sin to someone. We recommend this strongly. However, there are some sins that should be confessed to another person and not to the person who is directly affected by the sin. Again, we strongly recommend that spiritual counsel should be sought if the situation is delicate.