Your Sins Will Find You Out (ZT Fomum) 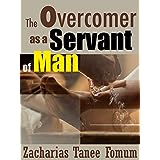 Gehazi had lost God. He did not seek restoration to God. His singleness of heart towards God was gone. The love of the things of the world had come into his heart; the love of money had eaten deep into him. The Bible says, “Then Naaman and his attendants went back to the man of God.

He stood before him and said, `Now I know that there is no God in all the world except in Israel. Please accept now a gift from your servant.’

`As surely as the Lord lives, whom I serve, I will not accept a thing.’ And even though Naaman urged him, he refused.... After Naaman had travelled some distance, Gehazi, the servant of Elisha the man of God, said to himself, `My master was too easy on Naaman, this Aramean, by not accepting from him what he brought. As surely as the Lord lives, I will run after him and get something from him.’ So Gehazi hurried after Naaman. When Naaman saw him running towards him, he got down from the chariot to meet him. `Is everything all right?’ he asked. `Everything is all right,’ Gehazi answered. `My master sent me to say, “Two young men from the company of the prophets have just come to me from the hill country of Ephraim. Please give them a talent of silver and two sets of clothing.” ‘`By all means, take two talents,’ said Naaman. He urged Gehazi to accept them, and then tied up the two talents of silver in two bags, with two sets of clothing. He gave them to two of his servants and they carried them ahead of Gehazi. When Gehazi came to the hill, he took the things from the servants and put them away in the house. He sent the men away and they left. Then he went in and stood before his master Elisha. `Where have you been, Gehazi?’ Elisha asked. `Your servant didn’t go anywhere,’ Gehazi answered. But Elisha said to him, `Was not my spirit with you when the man got down from his chariot to meet you? Is this the time to take money, or to accept clothes, olive groves, vineyards, flocks, herds or menservants and maidservants? Naaman’s leprosy will cling to you and to your descendants for ever.’ Then Gehazi went from Elisha’s presence and he was leprous, as white as snow” (2 Kings 5:15-27).

Elisha refused Naaman’s gifts. That ought to have settled the matter for Gehazi also, were he a true servant. However, Gehazi had lost God and, with the loss, the loss of the heart of a servant. He began to serve Gehazi. Covetousness led him to: run after Naaman, lie to Naaman, receive two talents of silver and two sets of clothing, hide them, lie to the prophet, reap the leprosy of Naaman for himself and his progeny.

Before that day, the love of the world and the love of the things of the world had entered his heart. He could have dealt with them, but he did not. He allowed them in his heart and they developed until they killed him! The Bible says, “But each one is tempted when, by his own evil desire, he is dragged away and enticed. Then, after desire has conceived, it gives birth to sin; and sin, when it is full-grown, gives birth to death” (James 1:14-15).

If there is an illegitimate or an unholy desire in your heart, please deal away with it. It will ruin your communion with God and, finally, destroy you and your progeny.

Gehazi would have become the next prophet.

He might have asked and received a double portion of the spirit that rested on Elisha. He would, consequently, have performed twice the number of miracles that Elisha performed, that is, twenty-eight. The purposes of God for him would have been established.

He lost all these and, in place of them, had leprosy!

WHAT THE NATION LOST

The tragedy of Gehazi’s sin was not only personal. First of all, Elisha lost his valued servant and the Bible does not bother to name the one who took over from where Gehazi failed (2 Kings 6:15).

All failure of servants is, first of all, personal. However, it could also result in the failure of a city, nation, continent!

Your place as a servant may affect the destiny of a city, a nation, a continent, the planet Earth.