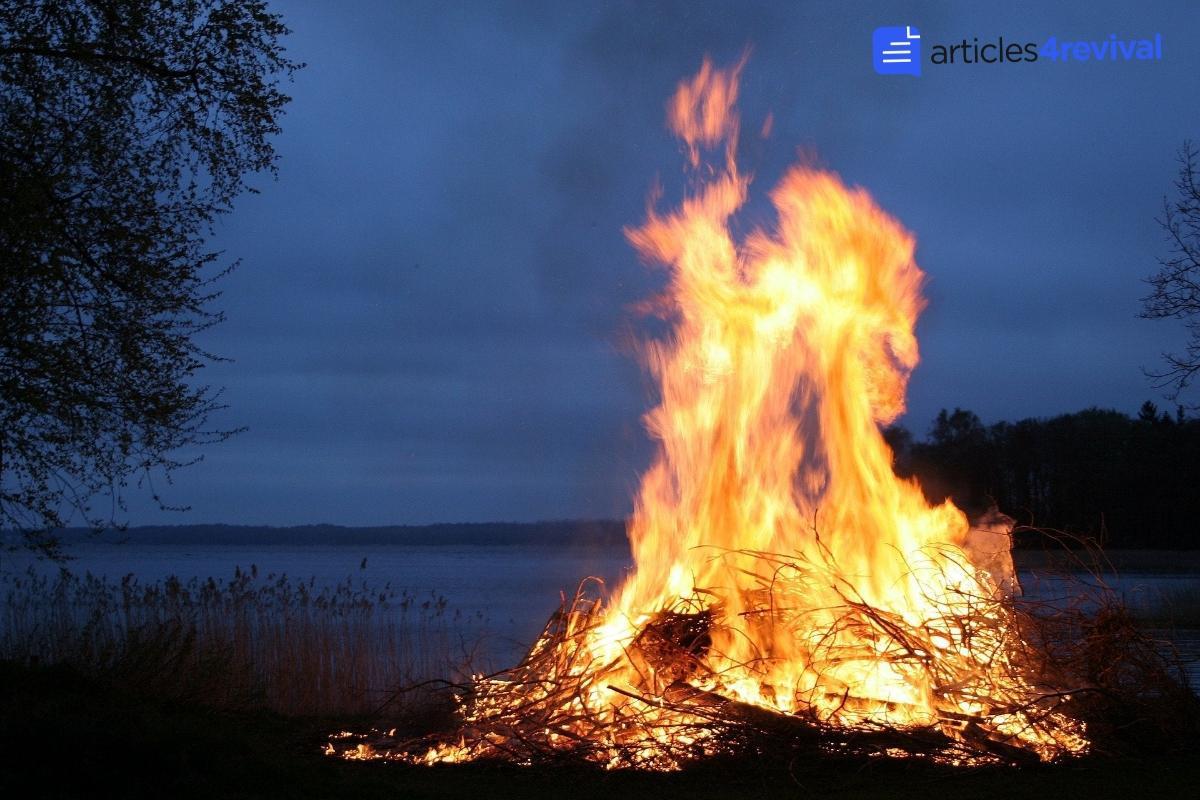 Aaron’s sons Nadab and Abihu took their censers, put fire in them, and added incense; and they offered unauthorised fire before the Lord, contrary to his command.

So fire came out from the presence of the Lord and consumed them, and they died before the Lord. Moses then said to Aaron, “This is what the Lord spoke of when he said: “‘Among those who approach me I will show myself holy; in the sight of all people I will be honoured.’” Aaron remained silent. Moses summoned Mishael and Elzaphan, sons of Aaron’s uncle Uzziel, and said to them, “Come here; carry your cousins outside the camp, away from the front of the sanctuary.” So they came and carried them, still in their tunics, outside the camp, as Moses ordered. Then Moses said to Aaron and his sons Eleazar and Ithamar, “Do not let your hair become unkempt and do not tear your clothes, or you will die, and the Lord will be angry with the whole community. But your relatives, all the house of Israel, may mourn for those the Lord has destroyed by fire. Do not leave the entrance to the Tent of Meeting or you will die, because the Lord’s anointing oil is on you.” So they did as Moses said. Then the Lord said to Aaron, “You and your sons are not to drink wine or other fermented drink whenever you go into the Tent of Meeting, or you will die. This is a lasting ordinance for the generations to come. You must distinguish between the holy and the common, between the unclean and the clean, and you must teach the Israelites all the decrees the Lord has given them through Moses” (Leviticus 10:1-11).

Aaron the high priest had two sons. They were priests. Everything being equal, one of them was to become the high priest and enter the Holy of holies. As priests, they had a very special place in the plans and purposes of God. They had special responsibilities and special privileges. It was expected of them that they would behave themselves according to the high office to which they had been called.

The higher the office, the more a person is called to put aside his own

and seek, know and do the will of God. He is to replace his every thought, method, plan, interest, desire, inclination, and all else by those of God.

High office means that a man comes to grips with the fact that the thoughts and ways of God are very different from his; that his best thoughts and best methods are an abomination to God. The Lord God said, “For my thoughts are not your thoughts, neither are your ways my ways,” declares the Lord. “As the heavens are higher than the earth, so are my ways higher than your ways and my thoughts than your thoughts” (Isaiah 55:8-9).

The Lord Jesus recognised this and acted accordingly. The Bible says, “For I have come down from heaven not to do my will but to do the will of him who sent me” (John 6:38). He emptied Himself of all the glory of heaven and emptied Himself of his own will, thoughts, methods, plans, likes, dislikes, interests, inclinations, and all else before he came down to earth. He thus separated Himself from the common. Common people do

for their own reasons.

Those who have separated themselves from the common have no such freedom. They must do what the Lord wants, or they are finished.

The two sons of Aaron offered unauthorized fire before the Lord, contrary to His command. They were in office. They had access to the censers and they thought that they could use them the way they wanted! They were not authorised and yet they acted! The Lord had command differently, but they decided to act according to their own thoughts. They put aside God’s command and imposed their own. Only one thing was left for God to do – remove them from office and from life. Fire came out from the presence of God and consumed them, and that was their end.

Aaron was the high priest. The two sons who died were his. He remained silent. His other two sons remained silent. They could not react like natural men. They were separated from this by Holy Office. Moses said to them, “Do not let your hair become unkempt and do not tear your clothes, or you will die and the Lord will be angry with the whole community. But your relatives, all the house of Israel, may mourn for those the Lord has destroyed by fire. Do not leave the entrance to the Tent of Meeting or you will die because the Lord’s anointing is on you.”

There are things that are unclean (impure) and those that are clean (pure). Every believer is to ensure that he separates himself from the impure and carries out what is pure. However, there are things that are pure and holy while others are pure and common. Those who have separated themselves from the impure may, in their purity, also separate themselves from the pure and common in order that they may occupy a certain place in God’s heart and, thereby, do what others may not be able to do. This further separation means that a person may have to behave as if he had no natural affections, in order to do something for God, which those who feel compelled to walk in their natural affections may not. Two examples should make this clear: C.T. Studd loved his wife dearly but separated himself from her by mutual consent in order to take the gospel to the Congo. Out of that “separation from the common” came the World Evangelization Crusade, which God has used mightily to bless multitudes. The Apostle Paul was well authorized by the Word to live on money received from the brethren, and most ministers are doing that today, and it is acceptable to God and commendable. However, the Apostle Paul decided not to use that right or privilege, but to work night and day at tent-making (without diminishing the investment of himself into the gospel), so as to provide for his needs and those of his companions! Is it surprising that he worked harder than them all and planted more churches, wrote more epistles, and did many other things more than the other apostles?

Spiritual office is a position for radical

of all for Christ.

The two sons of Eli accepted the office but thought that they could use it to do what they wanted. Instead of being consecrated, they were indulgent with their thoughts, acts, and perhaps wine. God could not stand such abuse of office, and so He removed them immediately.

Aaron sinned unto death for disobedience over what some would consider to be a very small matter.

Moses sinned unto death for disobedience over what some would consider to be a very small matter.

The two sons of Aaron sinned unto death for disobedience over what some would consider to be a small matter.

There are errors, weaknesses, failures, negligences, and the like that can be tolerated in the rank and file of the army, that will cost a General his job. There are errors that the recruit can make with little consequences on himself and on others. However, the error of a General may cost a whole war to be lost and, perhaps, result in the destruction of a nation or continent.

Does this say anything to you?

I pray that it does. Your future usefulness may depend on how you react to this warning.

The Sin Before You May Lead To Immediate Death: Do Not Commit It!

Weights and the sin that so easily entangles